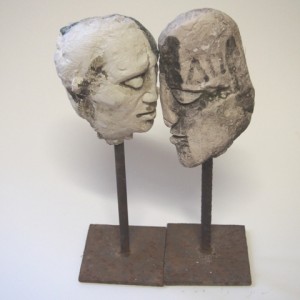 Human conversation between human heads. In divine material – clay. The eyes are closed and they speak voiceless. There are no bodies, no hands, no words and nor eyes. Impaled on their feelings. Just them.  Just a feeling and a silent “I love you” or …

This product is made out of porcelain baked at 1100 C with glazing; the objects are placed on (metal) stands. The rough iron stand interestingly contrasts with the tender texture of the porcelain.

The two heads can be ordered together and separately. The price quoted is for both.

Porcelain is a type of ceramic, but is much harder than it. It is produced from kaolin (white clay), quartz (silica) and feldspar. Non-porous and impervious to liquids and gas porcelain has a specific light radiance and when tapped gives a characteristic high and clear sound.
The production of porcelain began in China in the VII-the century.

Porcelain is one of the most important Chinese inventions that changed the lifestyle of people and that has been held in deep secrecy for centuries under the threat of death sentence. Following Marco Polo ‘s journey to China in Europe for the first time appeared some very beautiful pottery ware from unknown material that quickly became very valuable to the aristocracy . Alchemist Johann Buettger at one of his many attempts accidentally produced some material that turned out to be the first European porcelain. In the following year (1710) in Meissen opened the first European porcelain factory.

My art pieces are made of porcelain mass.
They are either glazed or matt depending on whether additional glazing has been applied.

The newest from Angela