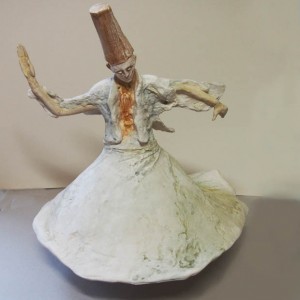 This is an attempt to portray Jalal ad-Din Rumi Mawlana (our Master), the great mystical poet of Islam who used to say “It is Love where we come from, with Love we live, and to Love we return.” He also said that Love was the cure of our pride and self-confidence.
When his image started to take shape under my fingers 15 years ago, I felt the waft of “presence”. I had always thought that people make up the stories of experiencing such feelings until it happened to me.  Then… By grace it must have been…
Rumi, son of a famous churchman, lived in the 11th century in Konya (now Turkey) and was a respected sheikh. We would probably know nothing about him today if he hadn’t met the traveling dervish Shams-e Tabrizi, whose appearance in Rumi’s  life turned the latter into one of the greatest mystical poets of all times. The legend tells about the mystical love of the two. The disappearance or the possible murder of Shams and Rumi’s grieving over his lost mystical lover brought about some out of the ordinary experiences and led to the creation of the amazing meditative “dance” – sеma or dissolution in the divine essence.
The whirling of dervishes is a symbol of the union of the mystical traveler – salik – with the Pre-eternity. The right hand “conducts” the cosmic energy, which passes through the heart, and the left hand “leads it down” to the earth. The meaning is humility, purification, awakening for God’s love and burning one’s ego in it. The seeker arrives at the Perfect and the one returns to the One.

The product is hand made out of porcelain; it has been hand colored and has a detachable ceramic stand. Together with the stand the product weighs 4360 gr. and has the following dimensions: 48x45x48 cm/ 18,9 x 17,7 x 18,9 in

Porcelain is a type of ceramic, but is much harder than it. It is produced from kaolin (white clay), quartz (silica) and feldspar. Non-porous and impervious to liquids and gas porcelain has a specific light radiance and when tapped gives a characteristic high and clear sound.
The production of porcelain began in China in the VII-the century.

Porcelain is one of the most important Chinese inventions that changed the lifestyle of people and that has been held in deep secrecy for centuries under the threat of death sentence. Following Marco Polo ‘s journey to China in Europe for the first time appeared some very beautiful pottery ware from unknown material that quickly became very valuable to the aristocracy . Alchemist Johann Boettger at one of his many attempts accidentally produced some material that turned out to be the first European porcelain. In the following year (1710) in Meissen opened the first European porcelain factory.

My art pieces are made of porcelain mass.
They are either glazed or matt depending on whether additional glazing has been applied.

The newest from Angela